These people have contributed greatly to NZSLTA’s history and the NZSL teaching field. 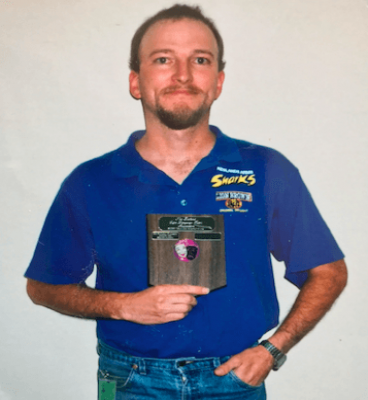 Shaun Fahey was an all-round NZSL performer in New Zealand arts. NZSLTA largely benefited from him showcasing a wonderful range of creative skills to the delight of NZSL tutors, NZSL learners, and the New Zealand Deaf community. Shaun participated in the NZSLTA StoryFest from 1992 to 2017 and was the winner twice. The 25th celebration of NZSLTA at the Signs of Professionalism conference in 2017 saw Shaun Fahey being awarded the overall StoryFest winner. He also contributed to rich NZSL storytelling with creative use of classifiers and facial expressions, and loved to do drama performances and share Deaf humour in many of NZSLTA’s national and local events and camps.

Being a brilliant graphic artist, he did drawings of the NZSL vocabulary (A Dictionary of NZSL, 1997; Online Dictionary of NZSL, 2011) and contributed to the development of illustrations and cartoons for the TeachSign teaching resources in New Zealand. 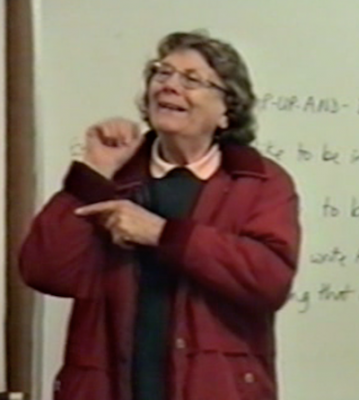 Dulcie McKie was a pioneer of Sign Language teaching in New Zealand.

Dulcie McKie, originally from England, first migrated to Australia before moving and settling in New Zealand in 1974. Seeing two Deaf men signing to each other in 1975, she decided to approach them but she had unfortunately forgotten her first language after being away from the Deaf community for 30 years. Instead, she tried to use BSL fingerspelling but communication broke down because those 2 men didn’t know fingerspelling. Later, Dulcie met John Hunt, the Deaf welfare officer and decided to get involved with the Deaf community principally to get her language back. Gradually, her old BSL (British Sign Language) started rolling back bit by bit.

In 1977, Dulcie McKie was involved with MOACOM Inc (Manual Oral Auditory Communication) with Nola Dickey, a Senior Teacher at Kelston School for the Deaf, who was the instigator and one of the founders. At a MOACOM public meeting in Auckland, Brian Reynolds, the Principal of Melbourne Deaf School, was a guest speaker and Dulcie was one of the Deaf signers to give her version of the sign language. At the same meeting, a motion was passed unanimously for the Total Communication (T.C.) to be a method of communication in Deaf education. As a result, the first dictionary of sign language in New Zealand - An Aid to Communication - was established and Dulcie was asked to teach Total Communication from 1977 until 1979.

During 1979 & 1980, Dulcie was a strong leader in raising greater public awareness of sign language in Auckland through instigating the Auckland Deaf Sign Signers group. In 1981 during the year of the Disabled (IYDP) the Auckland Deaf Sign Signers opened the TVNZ Telethon with I hear your hand, and quickly raised donations. Her team of Deaf sign singers was one of the popular groups, even appearing regularly on Stars on TVNZ Sunday programme. Their group was the first act to perform at the 1983 Telethon Live at the Auckland Town Hall, and repeated this feat in 1985 and 1988. They performed various signed songs from 1980 to 1990, which was being recorded for preservation (and later donated to SignDNA).

In 1985, Dulcie felt that the Auckland public was not ready to accept sign language classes and the "Communication Skills" class was set up at Auckland Deaf Society. Dulcie was the first tutor to teach and she led a team of tutors: Pauline Sedon, Shirley Withers, and Ngaire Doherty until 1990. In 1986 she was involved in teaching in community education classes at Pt. Chevalier and Glen Innes.

Through Dulcie's involvement in the NZ Deaf Association, a lack of Deaf tutor was raised. They decided to send eight Deaf people to London in 1991 for a 2 weeks’ crash course specially designed to train the tutors. They were Dulcie McKie, Ngaire Doherty, Shona McGhie, Paul Buzzard, Lindsay Jones, Shaun Rufel, Rebecca Williams, and Royce Flynn. On returning home, three follow-up workshops were followed up with a Deaf trainer from City Lit, London, Melissa Napier.

In 1985, Dulcie was involved in preparing the first NZSL Dictionary with Dan Levitt, the American trainer of Sign Language interpreting programme. In 1993, Dulcie was involved in the NZSL Tutors Auckland Branch in developing the NZSL Basic Handbook specially designed for classroom work. This book proved to be a bestseller because of its simplicity. The second book Handbook of Synonym Signs was produced in 2001, with the illustrations made by herself. In 2001, the proceeds from sale of those handbooks saw the Auckland Sign Language and Resources Charitable Trust being set up to fund NZSL resource and tutor development, including the NZSL Survey on Tutor Needs (2012); launch of TeachSign website; sponsorship of many NZSL resource development projects.

Dulcie always supported NZSLTA by attending conferences, participating in NZSL storytelling competitions, and providing “Essential English” in NZSL teaching workshops. On 16 March 2006, Dulcie McKie was a special guest who had the honour of cutting the ribbon to launch the new NZSLTA website on behalf of NZSLTA.

When the NZSLTA registration system was set up in 2008, she was recognised for her sign language teaching expertise through the special exemption category. 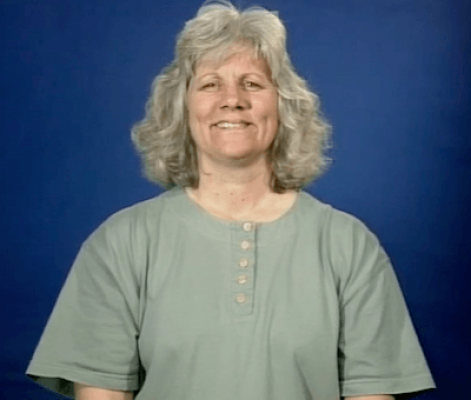 Penny Went was a founder of the NZ Sign Language Tutors Association (NZSLTA) in 1992. Since then, Penny ensured the development of NZSLTA by being involved in various roles: honorary secretary (1992 - 1996); president (1997 - 2001); executive member (2002); annual camp organiser (1997 - 2003). Penny also advocated with many organisations in relation to sign language work.

Penny worked as a part-time tutor for AUT’s Sign Language Interpreting programme in 1995 until 2004, as well as being a NZSL tutor in various Auckland community education classes. Her involvement in the NZSL Tutors Auckland Branch (TAB) included organising communication events and contributing her time to developing NZSL resources for the benefit of NZSL learners and tutors. She was a Deaf signing model, appearing in many NZSL resources. She loved telling NZSL stories and playing drama roles.

After gaining a certificate from Auckland Community Educators Association in 1994, she was one of the first historic group of Deaf NZSL tutors studying for a year at the Victoria University of Wellington and graduated with the Certificate in Deaf Studies: Teaching NZSL. She had been a NZSL trainer for local and national NZSLTA tutors during the period of 1993 - 2002.

Penny Went was awarded an NZSLTA honorary life membership in 2002.